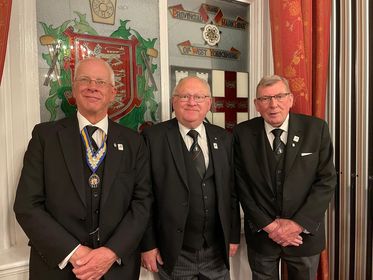 A demonstration of the Royal Ark Mariner Elevation and Mark Master Mason’s Advancement ceremonies is given every year at the Grand Master’s Lodge of Instruction Festival. The Festival for 2022, hosted by the Mark Province of Kent, at Mark Masons’ Hall in London on Friday 29 April, not only featured superb ritual but also a double delight for the Demonstration Commander and Master.

The afternoon started with an outstanding demonstration of an elevation by W.Bro. David Austin of Excelsior and Kentish RAM (amongst others). This was followed by a superlative (and entertaining) demonstration of an Advancement by W. Bro. Chris Metherell as Worshipful Master, ably assisted by W.Bro. Simon Clare as Master Overseer, both from Malling Abbey.

Unknown to either David or Chris, however, both been secretly assessed by the Provincial Grand Secretary, W.Bro. Stephen Hyland, for Silver Pins of Excellence. This meant that at the Festival Dinner, the President of the Festival, R.W.Bro. Peter Williams, had the double delight of announcing that both had passed with flying colours and, much to David and Chris’s surprise, the R.W.Bro Peter presented them each with their Silver Pins.

Although it unusual for pins to be presented for a demonstration ceremony it was felt that doing so in the presence of the Deputy Grand Master, seven Provincial Grand Masters (Present and Past) the whole of the Kent Executive and around 70 other brethren was plenty challenging enough!

Congratulations to David, Chris and the members of the Grand Master’s Lodges of Instruction for a wonderful time.