A New Minibus for the Freedom Centre

The Freedom Centre was founded on the initiative of the Delta Group which was formed from the local branch of Scope on the Isle of Sheppey. It became an independent charity in 1992.

The name was chosen by the centre members to reflect Friendship, Enlightenment, Encouragement, Disability, Opportunity and Mobility. 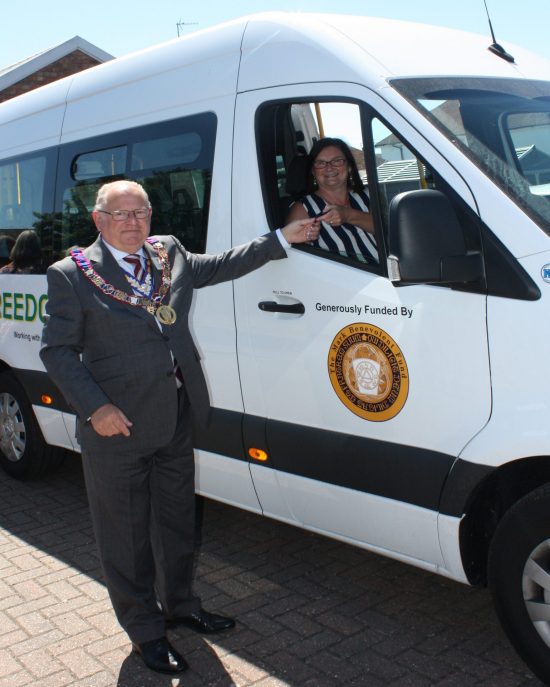 Their objective was to establish a member led support centre for people aged between 18 and 65 (on joining) with physical disabilities and offer a structured educational service and social activities. The centre is run by 10 part time paid staff, assisted by many volunteers and currently caters for 65 physically disabled people on a monthly basis.

A chance meeting between Ken Nunn of Dover and Cinque Ports Mark Lodge and Tina Cox from the Centre during a Warner Holiday, began the association of the Mark degree with the Centre. Ken soon found out that the Centre had a badly run down shed that they wanted to replace and a worn-out minibus.

The specially adapted minibus provided transport to and from the centre in the Swale area for the physically disabled and was also used for recreational day trips.

As sheds are easily found, Ken set about getting the funds for a replacement minibus through the Mark Benevolent Fund. H.W. Pickrell Ltd in Billericay were contacted and soon the specification for a fully kitted out Mercedes Sprinter Van was obtained at a cost of £54,707.02 plus registration fee.

Even though the Centre had been very proactive in raising and setting aside funds to replace the current minibus and currently had £13,600 set aside which could be used towards the cost of a new vehicle, The Mark Benevolent Fund agreed to meet the full cost of £54,762.

The fully fitted out bus arrived just in time for the volunteers to take the Centre users on their annual retreat and will then continue to provide specialised transport for the users.