A Rather Special Christmas Party 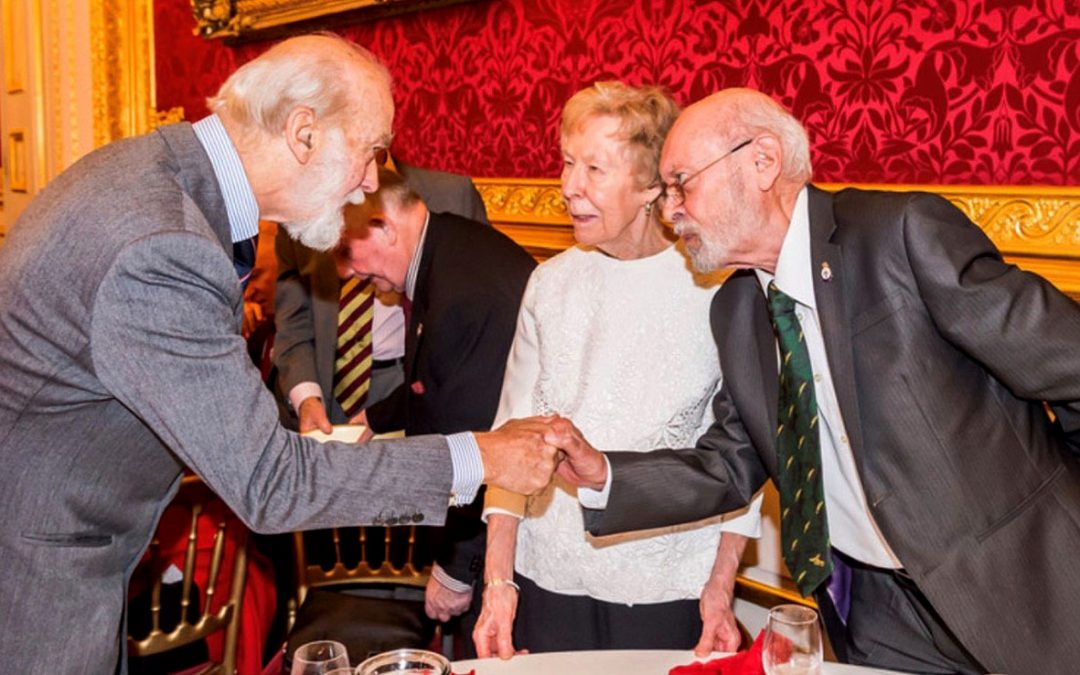 âWe received the following submission from VW. Bro. Alan Eadie of Gravesend’s Eos Mark Lodge, which we have decided to publish almost verbatim

Ray Walters and I, together with our respective wives Val and Jean were most fortunate to be invited to a rather special Christmas Party on the 6th December 2018. You may be wondering why âspecialâ as it is not unusual for invitations to Christmas Parties to be flying around just before Christmas. Well, this Party was held at the State Apartments, St Jamesâs Palace, by permission of Her Majesty, The Queen. Three hundred and five guests were seated at round tables for 10 or 12 spread over three rooms, namely the Throne, EntrÃ©e and Queen Anne rooms. Also, present were 35 Service Helpers, and 63 performers and artists.

Dame Esther Rantzen, DBE was seated next to Val Walters. Dame Esther was clearly a regular visitor to these Christmas Parties but had not received the same information we had received. Dame Esther announced that we would be receiving a Royal Visitor and asked if anyone knew who it was. I advised her that it would be His Royal Highness Prince Michael of Kent, GCVO. At this news Dame Esther, turned her nose up, and said she found it difficult to understand him as he did not speak very clearly. Then, looking directly at me, she said she thought this was probably because of his beard and moustache. I did not respond. Our instructions made clear that no cameras were allowed, and mobile phones had to be switched off and handed in at the cloakroom. I noted however that Dame Esther was using her mobile on and off throughout the afternoon.

We enjoyed a sumptuous afternoon tea, consisting of sandwiches, cakes, savouries, mince pies, tea, coffee and a delicious mulled wine. All this whilst being entertained by singers, magicians, balloonists, and celebrities (we had our very own celebrity on our table, of course). Richard Arnold of ITV fame was there, as well as Pam St Clement better known as Pat Butcher from East Enders, and others I did not spot. The table next to us was full of Chelsea Pensioners. A military quintet entertained us on arrival and subsequently also on our departure.

HRH Prince Michael of Kent turned up bang on time and started to circulate amongst the many tables speaking to virtually everyone. In due time he arrived at our table and spoke to Val & Ray Walters as well as Jean and me. Conversation with Val and Ray elicited the fact that HRH liked Folkestone and very much enjoyed his many visits to Capel-le-Ferne, near Folkestone, as the Patron of the Battle of Britain Memorial Trust. On the 1st June 2017 his HRH was there to unveil the bust of Lord Dowding. I also asked our Grand Master how his health was, as both Ray and I had toasted his good health many hundreds of times.

After our Royal guest departed, everyone moved into the Picture Gallery for the afternoonâs finale. This was a highly entertaining variety show featuring some top-class comedy, music and song, such as Margaret Keys, the Froback Dance Group, and Boney M, etc. There was certainly something for everyone. Then on top of all that, on our departure everyone received a âgoodyâ bag of souvenirs. The magnificent location and happy relaxed atmosphere undoubtedly helped to create lasting memories, so that everyone left with their spirits raised.

This annual Christmas Party was organised by a leading military charity formed in 1920 shortly after the first world war. There is a well known saying that âold soldiers never die, they simply fade awayâ. It is nice to know however that some service veterans receive one or two right royal surprises before they fade away. Ray Walters and I now have our fingers crossed that we may, in due course, receive invitations to their Annual Garden Party at Buckingham Palace next June.