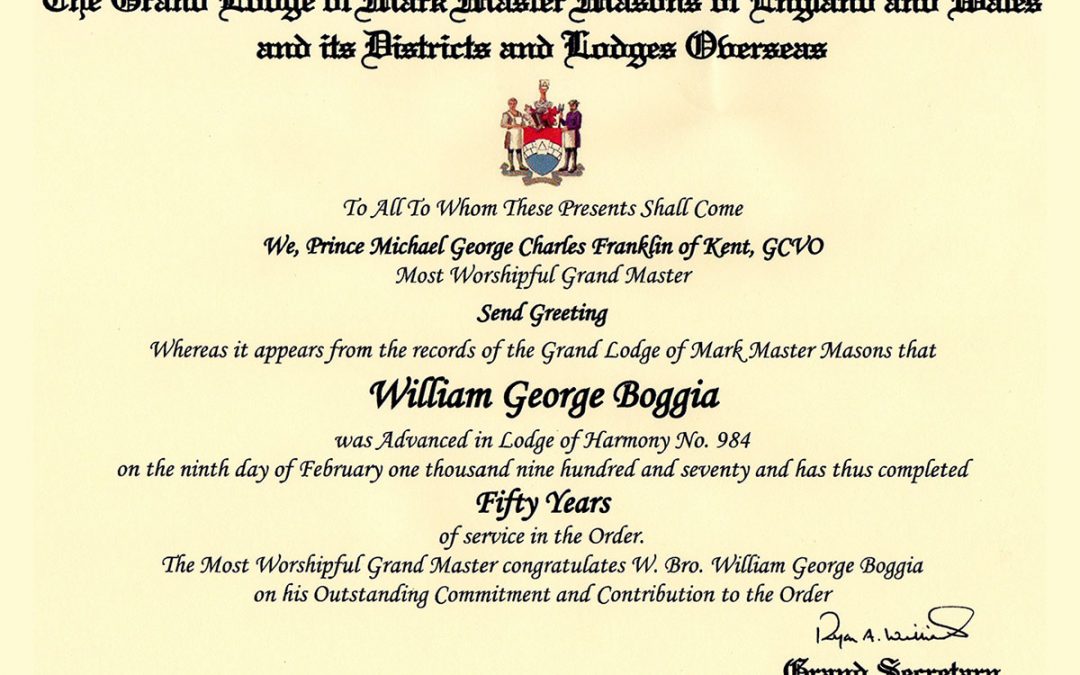 Under normal circumstances his certificate would have been presented to him at the Lodge’s installation meeting in April. Due to the Covid-19 pandemic and the General Suspension of All Masonic Activity this was not possible. However, with the recent changes to Government guidelines and it now being permissible to “meet one other person from a different household outdoors – following social distancing guidelines”, arrangements were secretly made with Bill’s wife Chris for V.W. Bro. Fred Brown, Deputy Provincial Grand Master to read and present Bill with a commemorative certificate, for his outstanding commitment and contribution to the order, at his home near Faversham on the late May Bank Holiday Monday. The original will officially be presented when things return to normal.

Bill attained the rank of PPGSO in 1993. He was Appointed to GStB in 1995 and Promoted to PGJD in 2005. Due to his advancing years, he has retired from a number of his Lodges recently but remains an active member of Harmony, as well as his two local Craft Lodges of which he is both an Honorary Member and a Founder. Bill was also a Founder of the Lodge of Harmony’s Anchored Royal Ark Mariner Lodge in 1981 and was Appointed to RAMGR in 2000.

In the past, Bill had been a representative of the Provincial Grand Master and coincidentally was the ‘rep’ at Broadstairs’ St Peter-In-Thanet Mark Lodge in 2003 when V.W. Bro. Fred Installed his successor. Fred joked with Bill that he must have put in good report about him and that “it was wonderful to be able to return the favour”.