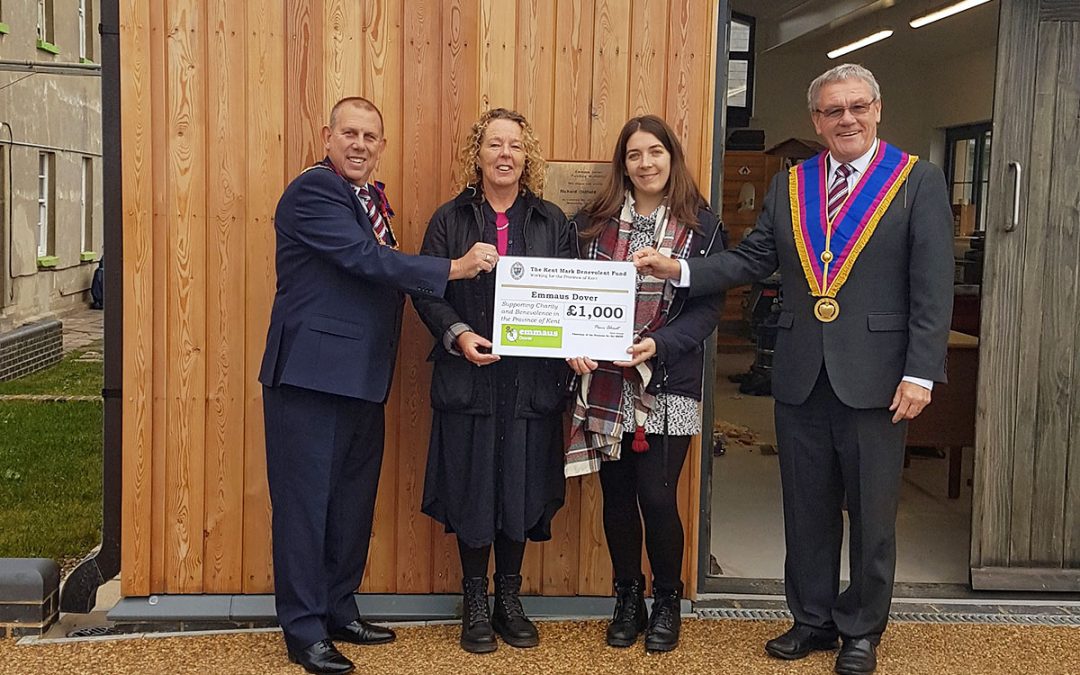 Emmaus (pronounced em-MAY-us) is a homelessness charity with a difference, they don t just give people a bed for the night; they offer a home, meaningful work and a sense of belonging.

Late  last year the Trustees of our Provincial charity, the KMBF, approved a grant of £1,000 to  Emmaus Dover  to enable them to  refurbish  two bedrooms which had been badly damaged by water ingress.

On Thursday 11th November W.Bro. Martyn Summers, A.Prov.G.M., accompanied by W.Bro. Brian Ward, Prov.G.Ch.Stwd., were warmly welcomed by Debbie Stevenson, Community Manager, along with many of the companions from the charity to receive a symbolic cheque for £1,000 – the original funds having been speedily transferred during the 2020 lockdown.

Martyn went on to speak briefly about the aims of the KMBF in the local community and the support it receives from Mark and Royal Ark Mariner Lodges within the Province.

Debbie responded by saying We are so grateful to the members of the Mark Province of Kent via the Kent Mark Benevolent Fund for supporting Emmaus Dover. The grant of £1,000 enabled us to redecorate and refurbish two companion bedrooms which we had not been able to use for several months due to external issues with damp and leaking windows. Having both rooms back in use has meant that we can now provide accommodation, support and meaningful work opportunities for even more previously homeless men and women .

Before departing Martyn and Brian were given a comprehensive guided tour of the  grounds where they were shown the accommodation used by the companions, the  retail areas, warehouse and the workshops where skilled companions breathe new
life back into preloved furniture.