Installation Meeting of Granville Lodge of Royal Ark Mariners No. 390 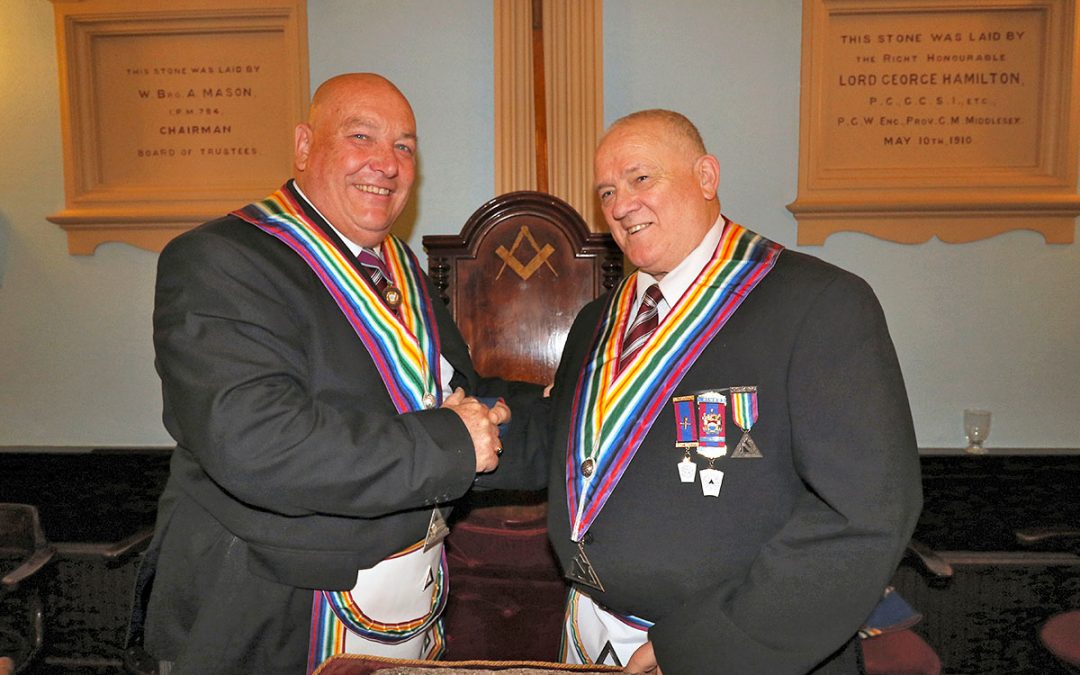 On Monday 10th April W.Bro. Peter Smith (left) was installed as the Worshipful Commander of Deal’s Granville Lodge of Royal Ark Mariners No. 390Â by dispensation.

Nothing too unusual, but there was a twist to the evening when W.Bro. Neil Drakley the Immediate Past Commander of the Thanet RAM Lodge and W.Bro. Peter’s lifelong friend was escorted to the Worshipful Commander’s chair and carried out the Installation ceremony much to the surprise of W.Bro. Peter.

Peter first met Neil when, at the age of 11, he joined the 2nd West Kent Boys Brigade in Blackheath.Â Neil was a young junior officer who used to moan at Peter a lot for “being an unruly tyke”.Â As the years went on they became really good friends and have been through “thick and thicker” together, so much so that they are Godparents to each other’s children.

Their Craft careers overlapped and inÂ 1999 they were both invited to join theÂ Margate Mark Lodge No. 1073 where they were advanced in in aÂ double Ceremony.Â As Neil was the first named candidate on the summons he worked his way through the offices and went through the Margate Mark Chair first with Peter following directly behind him. They were also in the PGMs Demonstration Team Together.
Peter joined the Granville RAM lodge in 2009 after being invited by visitors from Deal, as this was closer to home and was made the Assistant Scribe in 2010 then became their Scribe in 2011.Â Neil Joined Thanet RAM, both regularly attending each others meetings, and worked his way up through the offices and became their Worshipful Commander in 2015.

Peter said that “At The Installation meeting the Installing Commander told me that Neil had been asked to occupy the office of JW during the inner workings of the ceremony, so when I was stood at the front of the Lodge and the DC escorted Neil from his seat I couldn’t for the life of me understand why he put him in the WC’s Chair, until I got the crafty smile from Neil!Â What a brilliant surprise and what a great night, it meant so much to both of us that we will remember it forever.”

The next day Peter had to send a revised Installation summons to the Provincial Grand Secretary showing the correct details of the Installing Commander.

At the end of the evening theÂ Lodge presented W.Bro. Ray Walters, the representative of the RW Provincial Grand Master, with a cheque for Â£250 for the 2020 Festival.