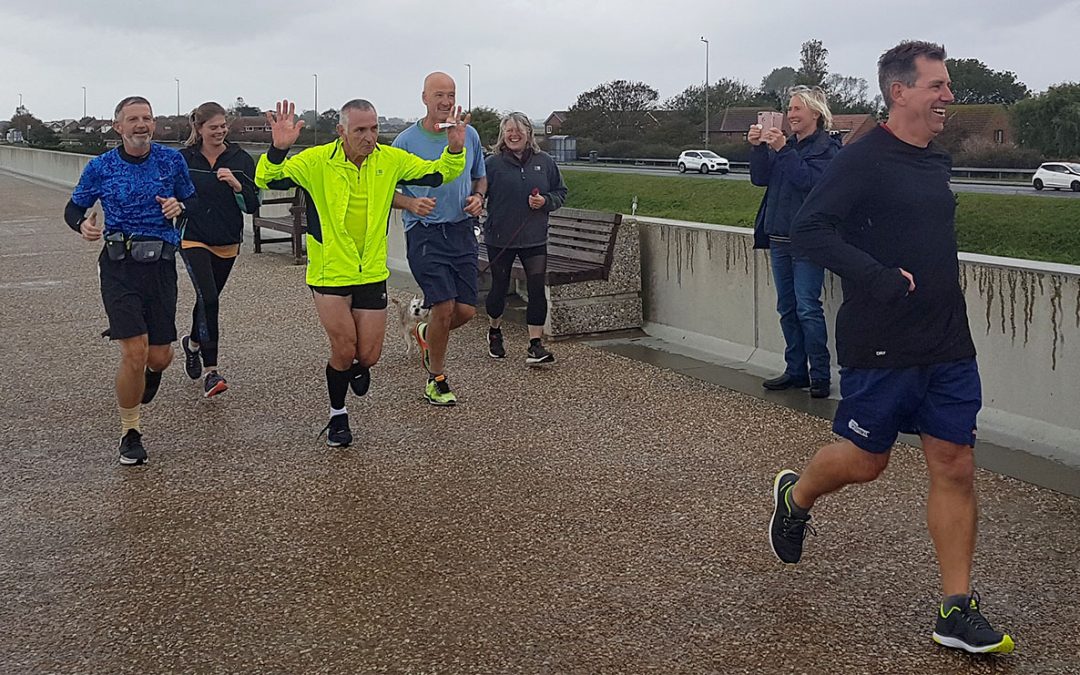 At 10 am on Sunday 4th October Perri Ahmet, Martyn Summers, Steve Hyland, Ivor Spencer and Brian Ward gathered at the Martello Tower Car Park in Dymchurch to cheer Jon Meyer off on his solo Virtual 2020 London Marathon. Within minutes of Jon setting off the weather changed and it began to rain, luckily the wind remained calm.

Undeterred by the wet weather Jon continued his run towards Dungeness Lighthouse 8 miles distant. This was the point where Jon would turn around and head back towards the finish line in Folkestone. 18.2 miles away. At various points along the long run back towards Folkestone Jon was joined by a few friends who would run a few miles with him but a special mention must be given to Keith Beavers who joined Jon at the half way point and kept him company until he reached the finish line.

Heading back from the lighthouse

Despite the squally weather the wind blowing from the West helped Jon on his run back towards Folkestone. This was evidenced by the excellent time Jon was recording, putting him ~15minutes ahead of his intended schedule. In addition to the runners who joined him for parts of his journey Jon was supported by many well wishers along the way. All of them clapping and cheering some even playing a bugle (Thank you Leigh Marshall). A special thank you also goes to Jon ‘s support team, Jooles Meyer who met Jon at prearranged points along the route to provide water when needed.

Jon and Keith with 8 miles to go

Jon and Keith with 3.5 miles to go

As miles ticked down towards the finish line the vocal support for Jon increased to finally welcome a very tired and weary Jon cross the finish line recording a time of 4 hours 23 minutes and 21 seconds. This put Jon 369th in his age group and finishing 8,606th out of 45,000 runners.

Joined by a few friends

Not only is this a fabulous achievement for Jon and something he should be rightly proud of we should not lose sight of the fact that Jon has raised in excess of £4,500 for the Province in sponsorship. There is still time to sponsor Jon by following this link. Sponsor Jon and make a difference. All sponsorship will now go to the KMBF.

I think we can all agree that Jon has truly Marked Well “.

On Monday after the event I asked Jon how he felt, he said I wish I lived in a bungalow “. Sore legs and stairs clearly do not go together well after a Marathon.