After 20 days at sea the ten strong team of Kent Scouts, sponsored by The Mark Province of Kent, made their way back up the Beagle Channel to Ushuaia, Argentina. 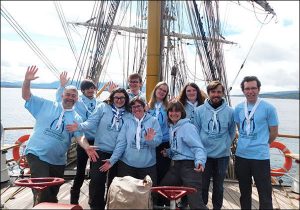 The team had twice crossed the infamous Drake Passage and explored the waters and islands of the Antarctic Peninsula during January 2022. All members of the team played an active part in sailing the Bark Europa tall ship – taking the helm, helping set sails, climbing rigging and doing lookout duty.

Commenting on the successful mission, following in the footsteps of Sir Ernest Shackleton, Alan Noake ReQuest2021 Project leader, said: “We have successfully achieved all our objectives for the voyage including taking up a last-minute opportunity to visit Port Lockroy which was established by Scout Marr during Operation Tabarin in World War Two. There is just some work to do on our other project objectives now upon our return to the UK – outreach to young people, developing the legacy fund and taking the commemorative plaque to Scotland.”

The ReQuest2021 project is a wider programme of activity centred around the expedition to Antarctica to commemorate the Shackleton-Rowett Expedition of 1921-1922. 100 years after Sir Ernest Shackleton’s ship Quest sailed to Antarctica a ten strong team of Scouts and leaders were recreating the original ethos of the expedition by undertaking their own voyage to the frozen south. The ten participants have been undertaking research projects whilst in Antarctica on issues such as climate change, energy, exploration, education, health and the environment. Findings will be presented in a range of engaging formats including photography, soundscapes, reports, artwork and interactive forums.

Bear Grylls, Chief Scout, sent the team off on their expedition with these encouraging words: “You are truly following in the footsteps of many legends including the great Sir Ernest Shackleton who set off on his Quest expedition. You are also doing vital work in how we can protect the world around us, which is so important.”

The team are now enjoying a few days relaxation and reflection time in Buenos Aries before heading home to the UK.

The Shackleton-Rowett Expedition of 1921-1922 included two Scouts: James Marr and Norman Mooney. On 30th December 2021 the team of ten scouts and their leaders will follow in Marr and Mooney’s footsteps and depart from South America for Antarctica.

The project is based upon three key principles:
PEACE – Young people will form relationships with each other, their communities, other Scouts around the world, and their environment.

ENVIRONMENT – Young people are more concerned about nature than ever and want to protect our environment – one study found that 60% of young people are worried or extremely worried about climate change.

HERITAGE – A way for young people to connect with intrepid explorers from the past, through an innovative programme of events, and mark those who went before.