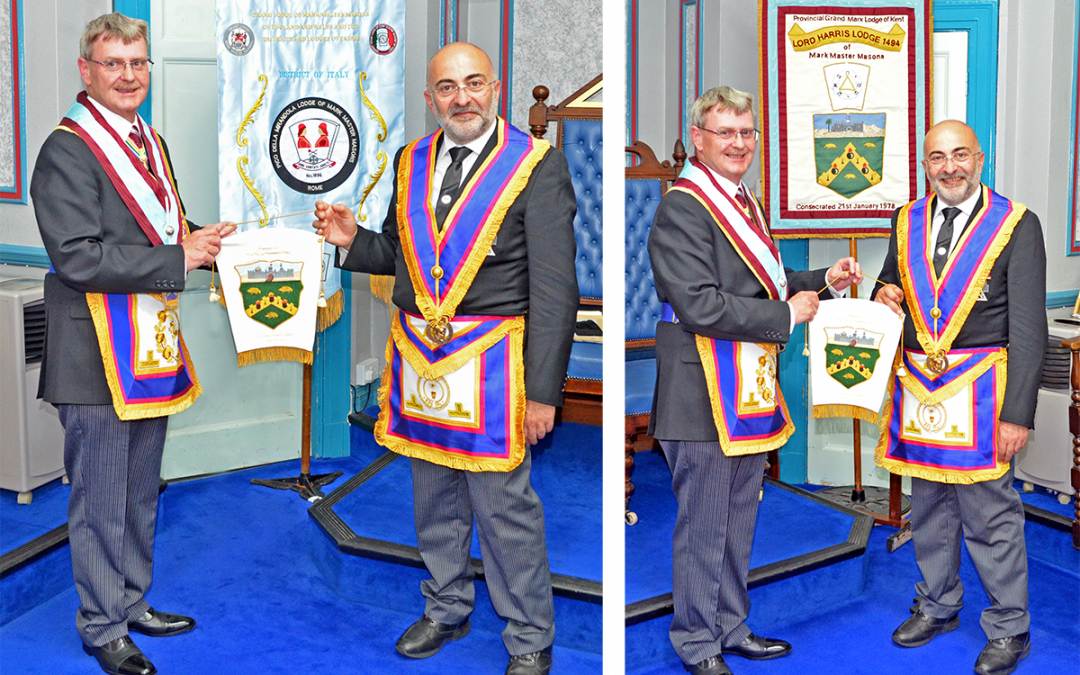 Friday 12 May 2017 was a truly exceptional day in the history of Lord Harris Mark Lodge. From an idea initially suggested by Bro Alfonso Camisotti, it had been decided that the Lodge would twin with Pico della Mirandola Lodge 1896 in the District of Italy.

Before the Ceremony of Twinning was carried out, The Provincial Grand Master, RW Bro Archie Torrance, addressed the assembly, as did members of the Pico della Mirandola Lodge. Here, Bro Jubin Nouri of Lord Harris Mark demonstrated his skills as an interpreter as he ensured that everyone present kept up with the addresses being made. Without Bro Jubin, much of the event would have been lost by most present.

Much of the history of Lord Harris Mark had previously been gathered by the former Lodge Secretary, the late WBro Derrick Lincoln. It was, therefore, fitting that his son, WBro Paul Lincoln, should deliver a history of Lord Harris Mark Lodge.Â
Everyone present listened attentively as all learned a little more about our history. In return, a history of Pico della Mirandola Lodge was read out to the acclamation of all present. With those important words having been delivered, the Ceremony of Twinning was carried out to the delight of all present.

A traditional exchange of gifts took place. Mrs Janet Stiff had, again, worked her magic and produced a pennant of the Lord Harris crest, which was presented to the Italian delegation and is seen in the pictures being proudly displayed in front of the banners of the respective Lodges by WBro Graham Raven and WBro Domenico Macciomei, District Grand Overseer, Rome.

This event truly demonstrated the universal nature of Freemasonry and showed how our Masonic Orders can bring people together from across the world, regardless of race (or language!). The day ended after an excellent Festive Board, where friendships were cemented and vows made to meet again.