More than £60,000 donated to our local Hospices 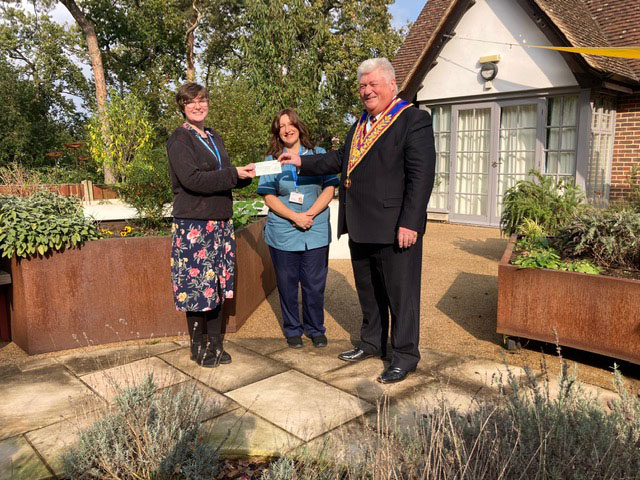 A total of £60,300 has been donated to Hospices in the Province following nominations from local Mark Lodges.

The donations were part of the Major Capital Grant of £1.3m to over 250 hospices from the Mark Benevolent Fund to recognise the contribution made by HRH The Prince Philip, Duke of Edinburgh to the service of the Crown and the life of the nation.

Eight hospices covering twelve individual locations across the whole Province were the recipients of multiples of £1000 nominated by the members of each of our fifty-nine Mark Lodges. Details and photographs of each presentation can be found in the links below:
¢ £5,000 to Wisdom Hospice
¢ £5,000 to Ellenor Hospice
¢ £6,000 to Hospice in the Weald
¢ £4,000 to Heart of Kent Hospice
¢ £10,000 to Demelza Hospice
¢ £16,000 to the Pilgrims Hospices
¢ £7,300 to St Christopher’s Hospice
¢ £6,000 to Greenwich & Bexley Community Hospice

Eagle-eyed readers will notice that St Christopher’s Hospice received an additional £300 which was a result of a  presentation made by eight year-old Bella Saunders in  memory of her grandad Steve, who had been so well cared for at the  Hospice.

In addition to the £6,000 donated to the Greenwich & Bexley Community Hospice from the MBF initiative, Welling’s  Kentish Lodge fund-matched their  nomination with a further   £1,000 bringing the total donated on behalf of Kent lodges to over £60,000. The Kentish Lodge donation was presented by  V.W.Bro Peter Wise to Lucy Griffith-Searles, Community Relations Fundraising Manager and Louise Graimes, Wellbeing  Support Worker, all of whom can be seen above.