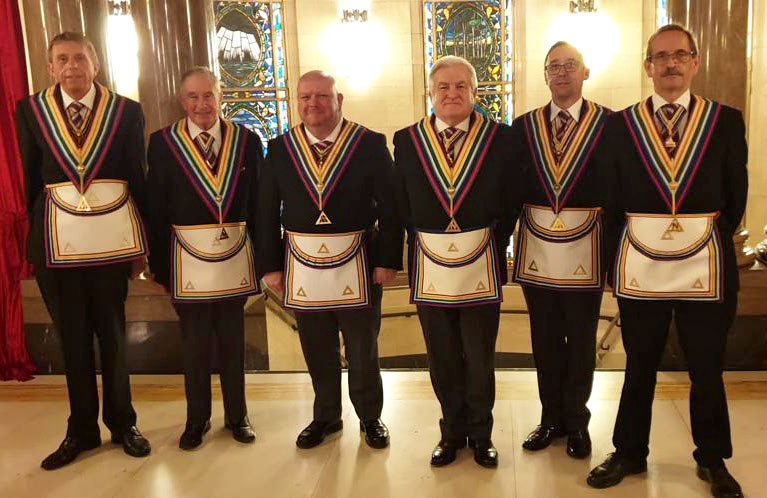 Following the latest Covid guidance, it was an Annual Royal Ark Mariner Assembly with a difference with Brethren in attendance (other than those with speaking parts) following the recently updated recommendation to wear face coverings during the meeting.

But, in true Royal Ark Mariner spirit, this didn’t dampen the enthusiasm of those attending the meeting and the Brethren cheerfully embraced this new, and hopefully temporary, normal with good grace.

The meeting was presided over by M.W.Bro. HRH Prince Michael of Kent, GCVO, who was delighted to invest the many recipients who had been able to make the journey to London with their thoroughly well-deserved Royal Ark Mariner Grand Rank.

Five Kent Brethren were appointed to R.A.M.G.R., namely: Pat Flanagan, Wally Freeman, Steve Hyland, Steve RozierÂ and Dr John Shervington. Steve, Steve and Wally were able to make the trip to be personally invested by the Grand Master,Â M.W.Bro. HRH Prince Michael of Kent and were supported by a good-sized contingent of members from the Province, a number of whom can be seen below.

After the investiture part of the ceremony, the Grand Master gave the following address:
“Brethren, I am delighted to welcome you here this afternoon and may I say how good it is to see you all after such an enforced absence.Â The last two years have seen every aspect of our daily lives blighted by the coronavirus and our masonic activities have not been immune from that.

I have been greatly encouraged by the way in which you have all adapted to the challenging circumstances we have faced and by your willingness to commit to helping those in need within our Order as well as the vulnerable within the communities in which we live.

Charity has always been at the heart of what we do, and I was particularly touched that following the death of The Duke of Edinburgh earlier this year, the Trustees of the Mark Benevolent Fund desired to acknowledge his contribution to the Crown and the nation by approving a major capital grant of Â£1.3 million to the hospice movement in England and Wales.

A total of 273 hospices benefitted from this initiative at a time when their ability to raise funds to support the valuable work they undertake for those in the poorest health has been severely limited.

During the last two years, Freemasonry has faced perhaps its greatest challenge and I am most grateful to the Grand Secretary and the staff at Mark Masonsâ Hall for all that they have done to keep in touch with the membership. The constant flow of updates from Grand Lodge has played a vital role in maintaining interest and I hope minimising the reduction in our numbers.

The launch of the Virtual Business Meetings scheme in the Spring of last year enabled over 8,000 units to carry out important administrative tasks at a time when face to face meetings were not permitted. Royal Ark Mariner Lodges as well as Units in the other Orders administered from Mark Masonsâ Hall have been able to resume face to face meetings and focus on the important task of admitting new members.

Brethren, this is just one example of how our Order has adapted to the constantly changing circumstances we have had to endure. Out of a desperate situation we have learned some valuable lessons which will undoubtedly shape the future development of the Order.

This year marks the one hundred and fiftieth anniversary of the Degree of Royal Ark Mariner being taken under the protection of Grand Mark Lodge. This decision, announced at the June Communication of the Mark in 1871, by the Grand Master, Reverend George Portal, stands as a beacon in the history of the Degree and established an inextricable relationship between Mark and Royal Ark Mariner masonry that grows stronger as the years pass.

The simplicity of our ritual and the beautiful and important lessons it teaches us make it one of the jewels in the crown of Freemasonry.

Today I have appointed over one hundred and twenty Brethren to Royal Ark Mariner Grand Rank â a distinction which recognises faithful and distinguished service and is a relatively recent introduction in the Order, having first been bestowed on deserving Brethren in 1967. To each of you, I send my warmest congratulations and trust that you will have many opportunities to enjoy your new status.

The award of a Grand Honour is not something that is given without consideration. It is a positive reflection of, and reward for, the work that each of todayâs recipients has carried out and I have no doubt that their preferment will stimulate them to promote the Order still further.

Brethren, although attendance at todayâs meeting is understandably lower than usual, I am delighted to welcome Brethren of our own Constitution from overseas.

In my Christmas message to you last year, I reflected on the many changes I have seen since my Advancement into the Mark just over 40 years ago. I feel sure that a spirit of optimism still prevails among us; that our collective reaction to the adversity we have faced in recent times will positively influence the way in which our Order develops; and that our heritage will be the foundation upon which we will build our future.

Brethren, today has, once again, been a special day. I am sure that you are all looking forward to the refreshment that follows so I will close my remarks by placing on record my thanks to the Grand Secretary and his staff for their work and the Grand Director of Ceremonies and his team for the excellence of the ceremonial we have witnessed.

I wish you all a very happy and peaceful Christmas and a New Year in which we will all have an opportunity to further the traditions of our beautiful Order.”