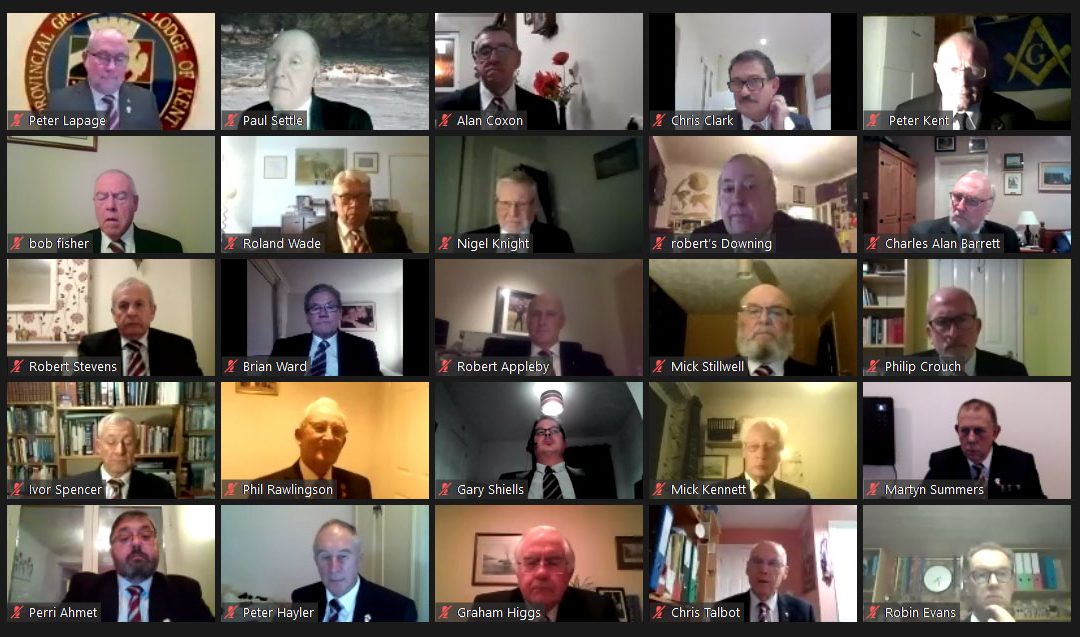 As a result of submissions to Mark Masons’ Hall the Grand Secretary, R.W. Bro. Ryan A Williams, had previously confirmed that the Grand Master, M.W. Bro. His Royal Highness Prince Michael of Kent, GCVO, had directed that “Medway Lodge of Mark Master Masons No.811 and Paddock Wood Lodge of Mark Master Masons No.1292 will, from 24th November 2020, amalgamate and, thereafter, be known as Paddock Wood Medway Lodge of Mark Master Masons being numbered 811 on the Roll of Lodges.” As part of his communication with the Province the Grand Secretary commented, “I feel sure that the decision, in this case, is the most appropriate way forward and provides the best possible opportunity to sustain Mark Masonry in Paddock Wood. Finally, please convey my thanks to all those who have given of their time and efforts over the last nine months to explore options for the Lodges and agree a workable solution with which the members are happy. I wish them every success in the future.”

In a first for the Province, the Presiding Officer, R.W. Bro. Archibald I. Torrance, Prov.G.M. declared the meeting open at 7pm, gave an introduction and welcome to the participants, commenting that as a result of the coronavirus pandemic the predetermined date fell in the middle of the 2nd lockdown and, when we set the date, none of us could have known how the world would be right now. Whilst there is some good news on the horizon, with several pharmaceutical companies making progress with developing vaccines it will be many months yet before we can put this crisis behind us and get on with our lives.

He went on to extend a very warm welcome to everyone, but especially to the members of Medway Mark Lodge No. 811 and Paddock Wood Mark Lodge No. 1292. He also gave mention to W. Bro. Roger Odd and V.W. Bro. Fred Brown who were respectively Chair of the amalgamation steering group and Deputy Provincial Grand Master who acted as his main point of contact during the planning discussions and process.

As Presiding Officer he explained the purpose of the meeting, namely the considerable efforts made by the members of both Lodges over several months and years to find a workable solution to the challenge of declining member numbers, commenting that he was both reassured and encouraged that the members of both Lodges had carefully considered their options before deciding that amalgamation is how they wished to proceed. He added that whilst the day was tinged with the sadness that a Warrant had been surrendered, it was also a moment of joy and excitement with thoughts of what lay ahead.

It had been the plan to stage a very special meeting to celebrate the amalgamation of two fine Lodges and to help them make a fresh start. An Amalgamation Ceremony has been written from scratch by our Prov.G.D.C., W. Bro. Ivor Spencer, and is ready to go. Sadly, we shall have to wait until it is safe to hold that formal ceremonial meeting.

The meeting continued with R.W.Bro. Roger Croucher and W. Bro. Charles Barrett reporting on the final actions taken as independent Lodges, which included Medway Mark Lodge making a generous donation of Â£500 to the Prov. G.M.âs Discretionary Fund. The Fund has already made a difference to several members facing financial hardship and as a result more than twelve membership resignations have been prevented.

The Worshipful Master-designate, W.Bro. Gary Shiells, gave a short address on the future plans for the new Lodge, which included details of at least two new members who were in the pipeline, member engagement, the commissioning of a new Lodge banner, the potential to re-moor with Robinson Lodge of Royal Ark Mariners and taking into consideration its location the possibility of theming the Lodge around an interest in hops and brewing.

A list of designated Lodge Officers was read out by W. Bro. Bob Fisher, after which they were congratulated by the Worshipful Master-designate.

The Almoner-designate R.W.Bro. Roger Croucher proceeded to give a report on the welfare of the members of the Lodge. After which R.W. Bro. Archie addressed the Brethren present and spoke briefly about the excellent work undertaken in getting to the Lodge to this point administratively and the important work that lies ahead. He also mentioned the importance of keeping in touch with members, our Provincial priority of Welfare, Welfare, Welfare, appointing a Lodge Membership Co-ordinator, building a Lodge Growth Action Plan and embracing communication.

Although, due to the efficient organisation of the meeting, it was not quite the hour an impeccable Nine Oâclock Toast was delivered by W. Bro. Perri Ahmet, Dep.Prov.G.M.

After which, the Presiding Officer declared the meeting closed wishing everyone a happy and peaceful Christmas and New Year, with the hope that will be much kinder to us all.