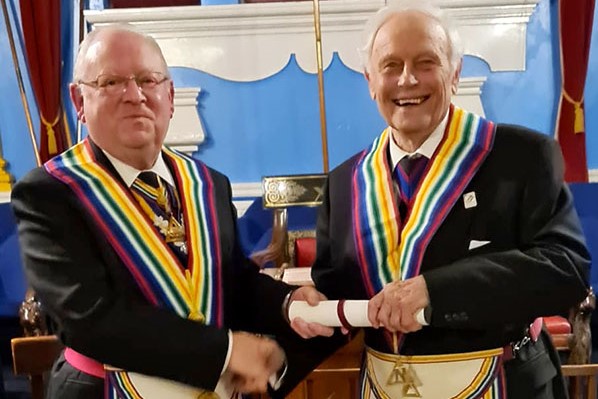 On the evening of Thursday 17th February 2022, W.Bro. Frank was finally able to celebrate his golden anniversary at his mother Lodge in Manor Road, Chatham.

Never one to rest on his laurels, to mark the occasion Frank took to the Chair, by invitation of W.Cdr Ian Mclaren, and Elevated his friend Bro. Simon Clare with his usual dignity and humour.

Frank has always been a passionate and busy Freemason, never more so that in our beautiful degree where he is a Past Commander of the Kent Installed Commanders’, Manor of Chatham and Malling Abbey Lodges, as well as being a Founder of the former and latter.

After the Elevation there was a surprise visitor to the meeting – R.W.Bro. Peter Williams, Prov.G.M. (accompanied by a large contingent of Provincial Officers including both A.Prov.G.M.s David Stiff and Martyn Summers), who proceeded to present W.Bro. Frank with his richly-deserved 50 year certificate.

Apparently Frank’s face was “an absolute picture”, akin to a scene from ‘This Is Your Life’. He was “gobsmacked” and “so pleased that his long-time friend was there to present him with the certificate”.