Following the recently announced changes to the Provincial Executive, we thought that you would like to know a little more about W.Bro. Trevor Marley Sharpe, P.A.G.D.C., our newest Assistant Provincial Grand Master. 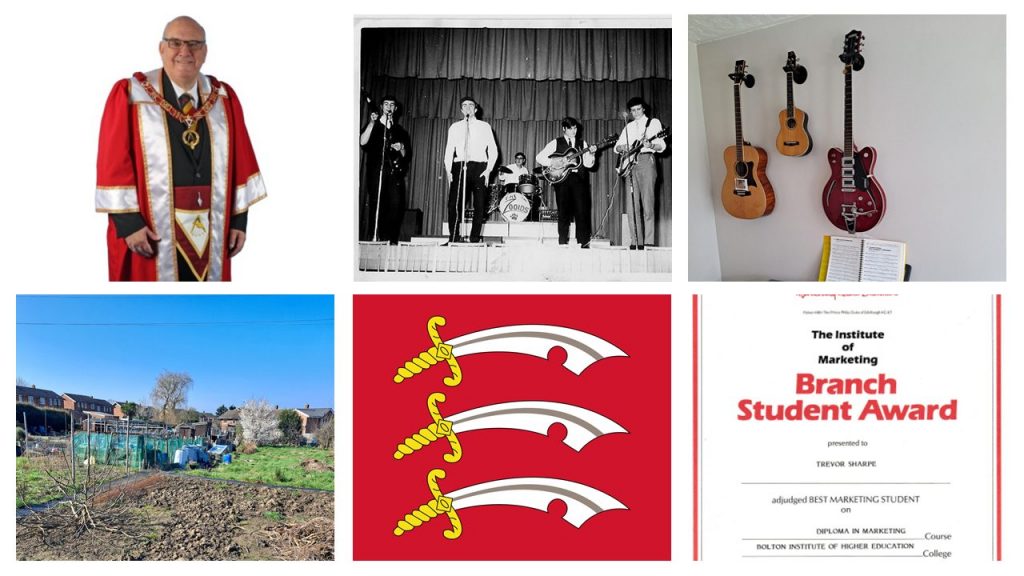 Trevor was born in Walthamstow, at a time when Walthamstow was part of the County of Essex. He and his family moved to Harlow (also in Essex) in 1959, where he lived until marrying Jacky and moving to Cambridge. That makes him, most definitely, an Essex boy.

At the age of two Trevor’s father, who was in the RAF, was posted to Karachi to train the engineers of the new Pakistani Air Force. Trevor and his mother lived there for two years before sailing back so that Trevor could start school in England.

Trevor has a large collection of harmonicas, ranging from a Professional Hohner Chromonica64 through a set of Piedmont blues harmonicas in different keys to various small “Hohner Marine Bands”, that are spread about in drawers in the house. He was taught by his Uncle who was a keen player, when he lived in Walthamstow. Nowadays, he prefers to look at them, rather than play them
(it makes them dirty!)

Trevor and his wife are Gilbert and Sullivan buffs. He has recordings of all of the major operettas, both audio and video. Needless to say he knows most of the songs, which he sings, badly, when no-one else is around.

At 15 he learned to play the guitar and with his friend Tony, formed his school’s first rock band called the Zooids (pronounced zoe-oyds). The Beatles they weren’t but they earned some extra pocket money and supported several bands on the fledgling Harlow pop scene. Trevor stopped playing when the band wanted to tour Norway and Trevor wanted to get married. He still has a small musical corner in his house in Larkfield and is allowed to make a noise, when his wife Jacky is not around.

Trevor and Jacky currently rent two allotments from the local Parish Council, where they grow mostly fruit and salads.

Even though he qualified as a Research Chemist, he has spent a large part of his professional career in Marketing, both in practice and latterly teaching. He is well qualified with both a post Graduate Diploma in Marketing from the Chartered Institute of Marketing and a Master’s degree in Marketing Strategy. Trevor studied for his CIM Diploma in Bolton, where he was Northern Area Manager for a large German Chemical Company and was “Student of the Year” in 1988. The Certificate is OK but the one pint beer mug that came with it is more useful.

Trevor is a keen photographer and was trained, professionally, when he worked at 3M Film development Laboratories in Harlow.

Masonically, Trevor was Initiated into the Craft in 1995, in the Chillington Manor Lodge No.4649 and was Exalted into Montreal Chapter No.2046 in 1997 (on his wife’s birthday!). He was Advanced into the Mark Degree in Biggin Hill Lodge No.1557 in 2001 and Elevated into its Anchored Lodge of Royal Ark Mariners in 2002. He is also a member of a number of other Mark and R.A.M. Lodges in Kent.

Trevor was appointed to Prov.R.A.M.G.R. in 2012, and to the Mark Grand Rank of P.A.G.D.C. in 2019. he also holds the distinguished position of District Grand Master for Royal and Select Masters, for the District of Kent and holds senior ranks in a number of other progressive Orders.